Much of Northeastern Oklahoma is (or was at some point) covered by wetlands and marshes, where builders must combat soft, malleable soil when setting foundations for commercial buildings. In the case of this O'Reilly's Auto Parts in Broken Arrow, it appeared that during the initial construction, the builders had assumed a thick layer of fill dirt would be enough to support the massive weight of the structure. As it turns out, it was not, and the building gradually began to sink. Because it was built on a flexible aluminum frame, different areas moved at different speeds and in different directions, effectively pulling the building apart: in some places, hand-sized gaps had appeared between windows and their frames. In order to restore the structure to its original state, it would require not only a vertical lift, but to be pulled back together horizontally as well.

Bedlam Concrete Lifting used a multi-directional lift system in order to achieve the desired lift on the structure. First, 7 FSI HA175 helical anchors were driven slightly downward at an angle of 20 degrees to horizontal in order to pull the sunken half of the structure back towards the other side. At the same drive sites, 7 more FSI HP288 helical piers were vertically driven to a depth of approximately 21 feet. After each pair of piers was coupled together using an FSI Model 288 Lateral Restraint Collars, fitted with a bracket, and secured to the footing, the building's aluminum frame had to be loosened before lifting. Almost a 5-inch lift was successfully performed on the building's frame, and pressure grouting the interior slab floor yielded another inch and a half of lift, resulting in a complete and total recovery. 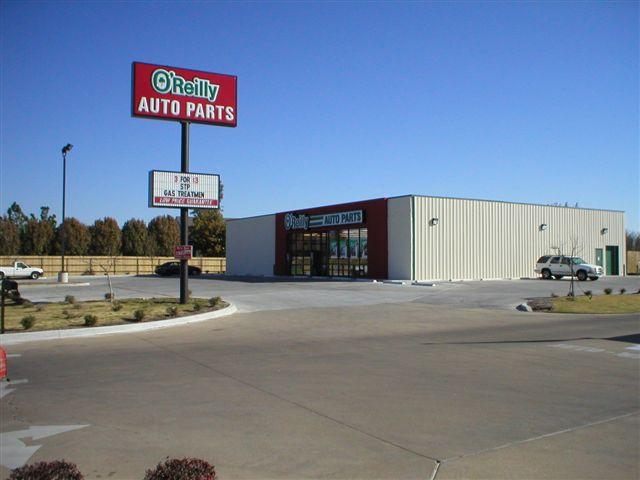 Photo Gallery: O'Reilly Auto Parts
Back to Previous Page
Back to Case Studies